ResMed’s intelligent non-invasive ventilation (NIV) solutions deliver advanced technologies that help take the work out of breathing. We'll work with you to help identify the right patients for NIV therapy.

Today, COPD is being treated with a range of therapies that seek to manage symptoms long-term, prevent exacerbations and provide symptomatic relief, including oxygen therapy and non-invasive ventilation (NIV).

Oxygen therapy is often used as a standard approach to provide relief from hypoxemia. For COPD patients with hypoxemia, controlled oxygen delivery is indicated for exacerbations, while long-term oxygen therapy has been shown to have survival benefits.1

Individuals prescribed oxygen therapy at home may also benefit from a portable oxygen concentrator, a device which separates oxygen from nitrogen in regular air.

Although oxygen alone may help address hypoxia caused by impaired gas exchange in the lung, it does not address hypercapnia caused by excess carbon dioxide retention alone.

Hypercapnic patients (characterized by increased levels of CO2 in the blood) are primary candidates for non-invasive ventilation as it seeks to improve the patient’s CO2 exchange and support the work of breathing when the patient's own physiology cannot do so effectively. And despite myriad clinical evidence supporting the use of NIV in the hospital for sudden deterioration of chronic hypercapnic respiratory failure due to an exacerbation of COPD, typical treatment after stabilization and discharge often only includes oxygen, medications and inhalers. The role of NIV in the home has yet to be formally adopted, even in light of recent evidence showing improvements in mortality, patient outcomes and a reduced recurrence of acute exacerbations in this patient population.2-5

The following clinical studies below provide evidence for the use of NIV and oxygen therapy in the home. We also encourage you to contact us to discuss which ResMed solution might be right for your patient.

Benefits of NIV with oxygen therapy

The HOT-HMV study shows that home oxygen therapy (HOT) combined with home mechanical ventilation (HMV) can significantly reduce the risk of hospital readmission or death within 12 months by 51% in hypercapnic COPD patients.2

A recent publication (September 2014) reported use of home-based NIV in the treatment of hypercapnic respiratory failure secondary to COPD. The trial assessed 195 stable Stage IV COPD patients and investigated the effect of long-term NIV (this study followed the patients for 1 year), targeted to significantly reduce hypercapnia via appropriate ventilator settings. The results showed a substantial improvement in one-year survival (mortality in the NIV group improved by 76% over the non-NIV group) and also quality of life (as measured by four different questionnaires).3 A retrospective analysis looked at all patients hospitalized at Temple University Hospital in 2011 with a diagnosis of AECOPD for hypercapnic respiratory failure and who used non-invasive ventilation successfully during hospitalization. Patients who used NIV at home following their hospitalization had lower readmission rates (40% vs 75%) and improved event-free survival after 180 days when compared to those who did not use home NIV.4

Kaplan-Meier curves of event-free survival comparing patients who used home NIV versus patients who did not use home NIV.4

A pilot study was designed to compare continuation of active home NIV and continuous positive airway pressure (CPAP) in COPD patients who had been successfully treated with acute NIV for acute hypercapnic respiratory failure (AHRF). The results showed that home NIV reduces the recurrence of acute hypercapnic respiratory failure following an initial event by 36.0% at one year compared to CPAP (38.5% vs 60.2%).5 In selected COPD patients with AHRF treated with acute NIV, continuation with home NIV is associated with a lower risk of recurrent severe COPD exacerbation with AHRF when compared with CPAP. 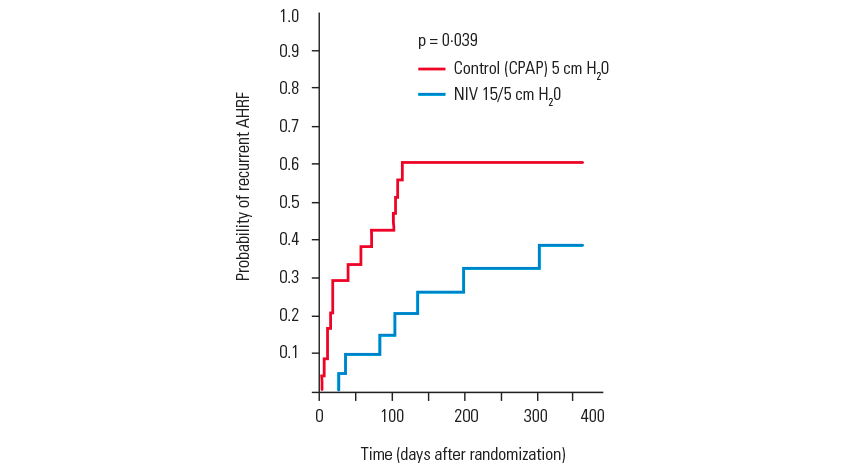 Be the first to know

Sign up now to learn about our newest products, personalized treatment tips and more!